The sight of a Tosa Inu arrayed in full ceremonial fighting regalia and traditionally brought into the fighting arena by two handlers, makes an impressive and unforgettable impact. 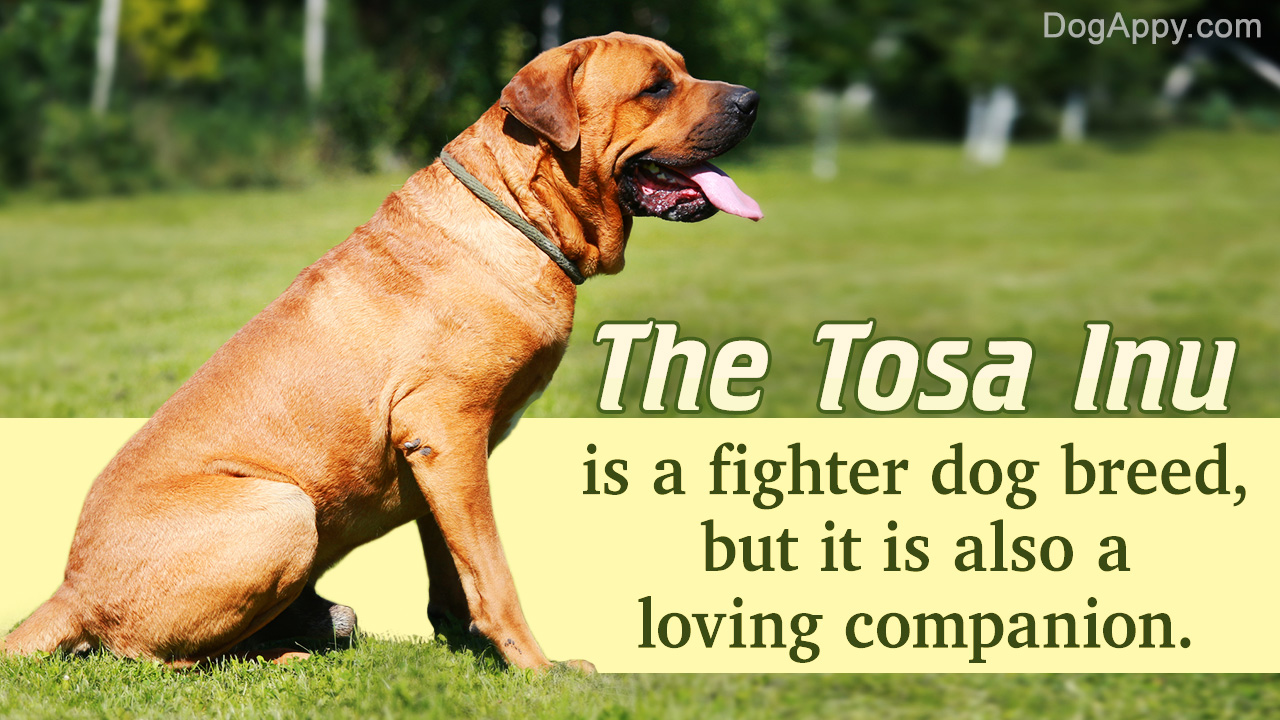 The sight of a Tosa Inu arrayed in full ceremonial fighting regalia and traditionally brought into the fighting arena by two handlers, makes an impressive and unforgettable impact.

The Tosa Inu, the formidable fighting dog of Japan, is an animal of legendary courage, intelligence, and amazing presence. It has been described as the Sumo Wrestler of the Canine World, and is considered a National Treasure in Japan.

Dog fighting has been a popular sport in Japan since ancient times. Like sumo wrestling, it was an elaborate, ceremonial affair, a sport conducted mainly by the Samurais, and the fighters, especially the winners, were feted and accorded much prestige. The dogs were bred specifically to enhance their fighting qualities, and puppies were jealously guarded and were not made commonly available.

Originally the native, wolf-like breed called Nihon Inu, which were also used to hunt wild boars, were pitted against each other in dog-fights. However, after Japan opened her doors to the Western powers in the nineteenth century, the Westerners brought many of their dog breeds to Japan, and these were soon enough entered into contests against the Nihon Inu. The Nihon Inu, being far smaller in size as compared to the Western breeds, could not hold out its own against the new competitors, and, in fact, began losing encounter after encounter. This was an affront to Samurai pride, and so, to redress it, they decided to develop a larger, stronger dog by breeding the Nihon Inu, with certain selected Western dogs. This breeding program was carried out on the Island of Shikoku in the town of Kochi in Tosa District, a region specifically renowned for its interest in dog-fighting.

The breeders of Shikoku started off with the Bulldog and the Bull Terrier, as these dogs had proved the most tenacious in the contests. The Mastiff was introduced for size and the Great Dane for both size and agility. Pointers, both English and German, were introduced for their sound, obedient characters and well-developed olfactory senses. Somewhere along the way the bloodlines of Saint Bernards and Bloodhounds were also added. The dog that resulted was the Tosa Inu. It exceeded all expectations and proved so formidable in the bouts, fighting with a silent, unyielding ferocity and dispatching its opponents with an almost insulting ease, that its fame soon spread beyond the Tosa district, and breeders in other parts of Japan began taking notice.

However, even more than before, the dogs were jealousy guarded and very selectively bred so as to maintain the ferocious fighting qualities. It was not easy to acquire them, let alone manage them, and so they never acquired popularity as pets. They remained almost exclusively in the hands of the people involved in the dog-fighting contests. Amidst the food shortages and other hardships of the Second World War years, the breed almost became extinct. It was revived in the post-war years with Tosa Inus brought from Korea and Taiwan (previously sold by the Japanese to the breeders there). The numbers have greatly increased since, and, while it is still not a very commonly seen dog in Japan, the breed has acquired a following overseas, especially in the United States, where they were first brought over by Japanese Immigrants, and later became popular after the actor Jack Pallance took an interest in them and began breeding them on his ranch. The Tosa Inus in the United States, however, since they are only bred for show qualities, are inferior to the Japanese Tosa Inus.

This is a massive, regal dog, standing well over 30 inches at the shoulders and weighing up to 150 pounds―the much larger Tosa Inus, weighing 200 pounds and more, are now extinct. Females are somewhat smaller than males. They are never used in fighting.

This dog has a very distinctive, large, wrinkled head, with drooping ears and a medium length, jowled muzzle with a scissor-bite. The eyes are small, with a calm, intelligent expression. The body is large-boned, with a broad chest and well-muscled legs. The thick coat comes in varied colors, but red is considered the ideal and usually one solid color is preferred; markings are allowed on the chest, but never on the head and muzzle. The normal life expectancy is 10 to 12 years. The Tosa Inu is subject to the ailments common to large breeds, like joint inflammation, hip dysplasia and intestinal bloat. Careful breeding can, of course, mitigate some of these problems. There are on average six to twelve puppies per litter.

Despite their notoriety as fighting animals, these animals make incredibly affectionate and loving companions. They are devoted to their families and are very patient and tolerant with the children. Extremely intelligent, with excellent guarding instincts, they are dogs one can depend on. Apart from guarding, they have been successfully used as Search and Rescue Dogs and in Therapy Training.

That being said, the Tosa Inu is however not a pet one should acquire without due consideration. First of all, it is a rather expensive animal to acquire, the prices with the best breeders ranging from $1,000 and up, and its regular upkeep also is quite considerable. In addition, being such a giant of a dog, it requires a lot of space. It’s not going to settle happily in a small apartment, or, rather, the apartment is not likely to happily settle with this boisterous creature―young ones are extremely boisterous and they take a long time growing up. Also the undoubted intelligence of the breed means that this is a dog with a mind of its own – and one that it’ll prefer to make up on its own too if the Master doesn’t learn to be masterly enough while it is still possible. For this reason, it is imperative that the dog be well-trained and well-socialized from a very young age, and taught to curb its natural aggressive tendencies towards other animals and strangers. With a large dog as this, tragedy can result otherwise.